I have always been a sucker for street food. Be it food sold at a hole in the wall cafe in Hyderabad or a food truck in San Francisco. I mean who cares if it is not a 100% hygienic or advisable for a healthy lifestyle. The fact of the matter is that street food is incredibly delicious and it essentially molds your understanding of a country’s local cuisine.

Street Mama is the latest venture from Global Kitchens which bring together the flavors, drinks and food from different parts of the world under a single roof.

The interiors exhibit a vibrant atmosphere and is sectioned into areas like “Mama’s Cave” which is the Live Kitchen, “Mama’s Hood” which is an amphitheater, “Mama’s Hangout”, the 80 feet bar spread and “Mama’s Court”, the Banquet Area.

Street Mama has quite an elaborate menu featuring twisted concoctions and street food that are sorted based on different regions/continents. It would be silly to even think that I could order a dish from each of the regions and see how they tasted. Instead, I ordered a couple of the dishes recommended by the staff and some that I just picked off the menu- because they sounded interesting.

I thoroughly enjoyed the Idli slider; especially the chutneys they were served with. The Chicken Satay- which is a popular street food in parts of South-East Asia, was prepared well but I have had better versions of this dish elsewhere.

The “Pashto in a pocket” was minced beef kebab served in a pita bread and is popular in the North-Western frontier of the Indian subcontinent. The kebab was not as soft as I wanted it to be and I personally would recommend spreading a spoon of hummus or Baba ghanoush on the pita. The vegan falafel was delicious and so was the translucent prawn dumpling- Prawn Hargao.

I was having a decent experience and as much as I would love to have tried more dishes off the menu hoping for a better experience, I couldn’t help but feel incapacitated. I decided to call it a day after ordering churros which was served with chocolate caramel sauce. So, what is my take? Well, I could not try any of the cocktails which I heard were mind-blowing so can’t really talk about the drinks. As for the food, Street Mama does justice (in a way) to the idea of bringing in street food from across the world but at the same time I cannot deny that there is room for improvement. Having said that, I intend to come back and try more of the food and cocktails to possibly give you a more comprehensive review of this “street culture” which you will find now in Garuda mall. 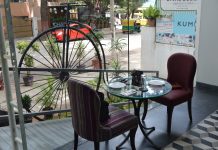